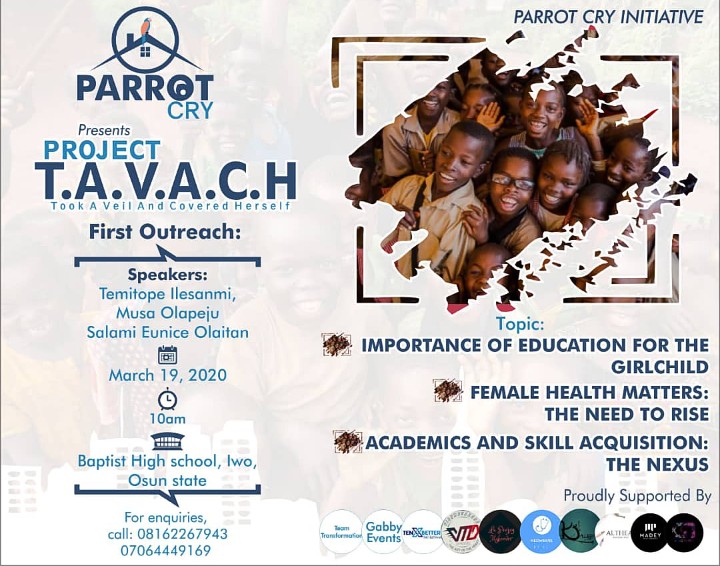 Therefore, Project T.A.V.A.C.H in the quest embarked on by a set of passionate individuals volunteers and ambassadors dedicated to ensuring that voice is given to the voiceless held a program on the 19th March 2020 at Iwo, Osun State. The event had in attendance, over 300 participants, including the students and teachers from two schools – Baptist High School 4 and Iwo Grammar School. The program centered on teaching the students – girl-children on three important issues that face them. The discussed topics were, The Importance of Education for the Girls child, Female Health Matters cum Female Genital Mutilation (FGM), and Combining academics with skills acquisition, taken by three different lecturers who were at the same time ambassadors of the project.
The program opened with a short prayer from one of the teachers of the school, followed by the introduction of the volunteers and ambassadors. The opening speech was later delivered by the convener, Bolawa Pelumi Solomon, to mark the official opening of the program.

Delivering his first teaching, Temitope Ilesanmi a YALI fellow, opened with a short personal story, while he further asked the students if anyone had the idea of who a girl-child is. After some time, it was, however, defined as “a biological female offspring from birth to eighteen (18) years of age. This is the age before she becomes a young adult. He emphasized the importance of education, especially for the girl-child, urging the participants to stand up and understand their rights, allowing no limitations to how far they can go or attain academically, as much as they desire. Girls’ education goes beyond getting girls into school. It is also about ensuring that girls learn and feel safe while in school; complete all levels of education with the skills learnt in the socio-emotional and life skills necessary to navigate and adapt to a changing world; make decisions about their own lives, and contribute to their communities and the world. Girls’ education is a strategic development priority”, said Temitope Ilesanmi

The second teaching was as such a compliment to the first, Musa Ọlápeju an undergraduate student of the University of Ilorin and a make-up artist, spoke to the participants on how skills acquisition is an important aspect of economic development for the girl-child, while also reiterating how important acquiring formal education can be. She further explained how having a skill could help sustain a girl, lady, allowing her to be independent of herself not relying on any unreasonable means.

During the recess, a personal story narration was delivered by Oyeniyi Temiloluwa Awawu, a gender equality advocate and a journalist by practice, titled “When I was a Girl”.

If you would wish to get copies of the lectures delivered and become a volunteer for PROJECT T.A.V.A.C.H – register through this link. And for more pictures and short videos follow us up on IG page – @project_tavach.

We are unable to access our Old Portal; Poly Ibadan Students cries for Help.

THE PROTEST: HAS THE “WHY” JUSTIFIED THE AFTERMATH? AND A SLAP IN THE FACE OF DIPLOMACY

IF MR. BULLY TEACHES… – A SATIRE

Great blog thanks so much for sharing.