“It is only in military regime that I know that you are to obey before you complain, even when you don’t know if it will cost your life…nah military regime we dey run for poly Ibadan like this o, you do anyhow you collect wotowoto…” – a student of The Polytechnic, Ibadan.

Over the years, a government administered by the Khaki uniformed men, have been examined not only to be brutal in administration, but also dangerous to the existence of Nature and it’s offsprings. However, Democracy being the counterpart of this system of government, gives room for fair hearing and consideration from concerned parties, before implementing a new development.

The Polytechnic, Ibadan, has been known over the years for being democratic in her administration, however, shortly before the commencement of the 2022/23 academic session, the institution has evolved her system of government into a Military regime, crushing the emotions and supplications of the students with her sabre-tooth soldier booth.

This inhumane development could be said to have been manifesting in the previous academic session, when the management placed an embargo on student’s activities within the institution. According to the memo released from the office of the Dean, Students’ Affairs, students were forbidden to gather in the name of celebrations, nor handing overs, nor anything related to student’s activities.

Students, on different occasions and different levels, had no choice but to bore the burden of bringing their plans to reality by external means, even when majority had to pay the double of the initial budget they had slated for a program.

“For our award winning night, we had to rent a hall outside the school, the amount we paid for the hall sef will go a long way on our budget. We had to rework on our designs and send another invite to our guests as per change of venue and date…after the whole stuff, we spent more than the double of what we had budgeted for” a president of an association lamented.

It is the sixth week into the 2022/23 academic session, and the institution is yet to bring the Students’ Union Government election for the session, into reality. Tagging their nonchalancy towards the election, to security issues, the management of the institution had stopped midway after screening the aspirants, hereby, raising the hopes of the students, who had held to the belief that “election will hold soon, the management is working back and forth to make it happen”. However, since the 6th of September, that the election has been declared postponed, the institution is yet to say a word on the election.

Knowing fully well that the Student Union Government, is the only body, that students look up to as their Messiah, to save them from the claws of the management. The institution, did not only murder the savior of the students, also it has capitalized on the absence of the savior, by extorting the students heavily, without considering the economic situation of the country.

On the 19th of September, 2022, the institution staged up a #3,000.00 fee for a standard and recognized student’s identity card. According to them, the ID card which would be NHIS approved, would serve as a means of identifying and censoring the students on campus.

However, some students of the institution have shared their views on the biometrics exercise.

“They said we should come for Biometrics, but when we got there, they were snapping us up and down. I was expecting something like thumbprinting, genotype, eyeball scanning, and other stuff like that, but all they did was snap passport and put ₦3,000.00 in our portals…” – a disappointed student narrated.

Just as the Military men would give orders without considering it’s effect on the people, the institution has allegedly inflated the penalty fee for deadline payment, with an inconsiderate deadline.

“Just imagine someone like me that couldn’t meet up with the deadline just because I couldn’t raise ₦10,000 to complete the money, and you’re now saying I would add another ₦20,000 to the money, even when my landlord has been calling me to renew my rent, no food at home and other stuff that demand money urgently”. Samson Garuba, another student explained.

Just as a popular saying that “What is good needs prayer, what isn’t good, needs prayer as well”. Students on campus have resolved to taking the management to God in prayers, since the SUG, their savior, has been murdered. However, the management has as well, launched itself against the students, mandating that there should be “no student’s religious activities, including vigils”.

“Since they have said we should not do anything in the school and we didn’t, I think this has given them the mindset that we will heed to anything they say. How can they say we should not gather to pray, even Rector himself can’t say he won’t go to mosque on Friday. Nothing can stop us from praying, either inside mosque or church, if they want to kill us they should come and kill us” – a religious head exclaimed.

If the Student Union Government has been murdered, and the pathway to God has been blocked, who shall the save the students of The Polytechnic, Ibadan, from these maiming claws of the management?

“It is obvious that these management people already had dangerous plans for us and that is why they want to scrap our SUG, because they know that it is the only hope of the student, and if it’s not that they want to scrap it, they should’ve conducted the election even before the commencement of this session” a student explained.

“The problem of this school started since the very day they appointed Major General Makinde, as the Dean Students’ Affairs, that man is the major issue we are facing in this school. It is as if the management appointed him to wage direct war against the students.”

“No election, embargo on student activities, no handing over/sendforth, no religious gatherings, heavy extortions in polished names, among other decrees from the Military regime, spearheaded by Major General Makinde, the Dean Student Affairs. May The Polytechnic, Ibadan, never happen to Nigeria” an aggrieved student of the institution poured out. 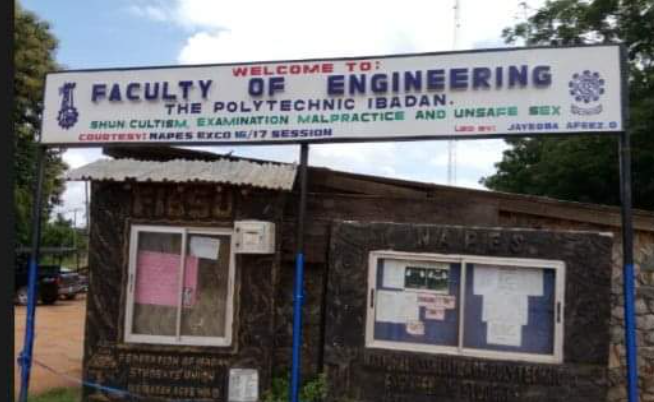 History Written in FESSA (The Polytechnic, Ibadan) as they Conducts First Manifesto and Elect First Female President since Inception