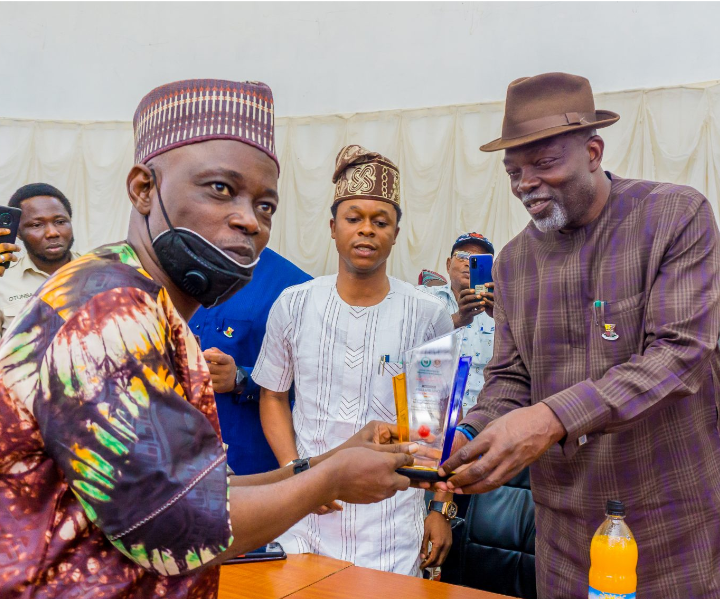 These awards were presented at a colourful program held Wednesday 16th June, 2021 at Assembly Hall, North Campus of the institution at the grand finale of the Students’ Union’s Week. The program which had dignitaries in attendance such as the Rector of the Institution; Prof. Kazeem Adebiyi, Dean of Students’ Affairs, Dr. S. A. Ajibola, Public Relations Officer, Mr Adewole Soladoye and host of others.

While giving his opening remark, the Students’ Union President; Com. Fadare Blessing eulogised the effort of the Oyo State government, management and staff towards ensuring cordial relationship among the student and paving way for conducive atmosphere for learning. He also emphasised on the success of the current administration which is a thread mark for success for all Polytes.

Hon Victor Olojede speaking at the event, he thanked the institution for counting him worthy enough to be bestowed with such an award, he further promised the students in the state of more commitment, making it known that his office is widely open for all students. He also stated that he is always ready to serve as continual linkage between the Oyo State students and the Governor of the State. “Be focus on your studies, make your parents proud and you will be proud of what you have become, be good ambassadors of your school and to the state entirely”, he said.

Also, the Chief of Staff to the Governor, Chief Bisi Ilaka was presented with an award of excellence, towards his fatherly role and his responsiveness whenever he is called upon. Hence, the SUG made a request for the erection of 250 capacity building while the Chief of Staff promised to help substantially when the time arises.

More so, the former Welfare Secretary of SUG, Otunba Oluseye Opatoki applauded the Oyo State Government, management of the institution, SUG, dignitaries, guests, friends and students toward promoting qualitative education in the school. “This is a great institution that has produced many prestigious and successful individuals in the society. As a matter of fact, this is one of the best institutions in the state”, he concluded.

However, there were numerous performances at the event which include dance performance, beauty pageant, and award presentation to students who have done honourably in one way or the other.

The beauty pageant showcased the beaut of both prince and princess. This was also a spice that added to the flourishing and glory of the event. Miss Omotolani from Local Government expressed her appreciation towards the success of the pageantry likewise Mr Poly from SLT did rendered his gratitude to the organisers and every students of the institution.

While speaking with the Press Council’s correspondent, the Social director of the SUG from Business Administration, “this is an avenue for the Students’ Union to give back to the students and breed the oneness between us. This event alone has made us to come together as one socially irrespective of the department or faculty. The performances and skills were made free to all students so that from here, we promote talents. The turnout was massive and a big thank you to all who made it possible for this event to be a reality”, he concluded

When you Hear Southerners Inside The Polytechnic, Ibadan; Write off any Violence in your Heart

IBADAN POLY AUTHORITIY SUSPENDS ALL PUBLIC ACTIVITIES IN THE INSTITUTION