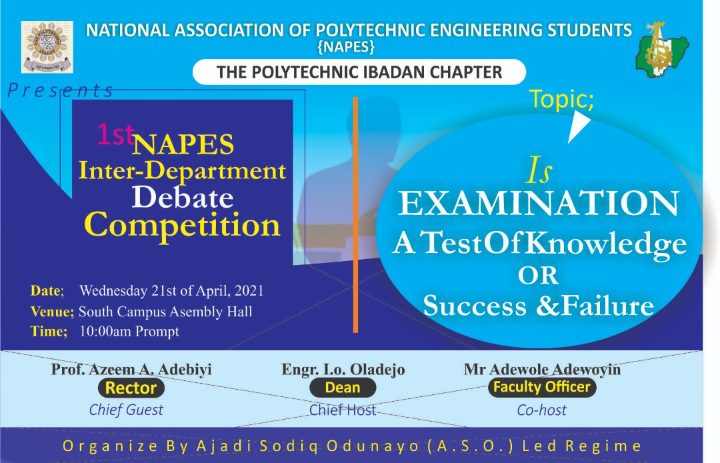 From: FENG PRESS.
The National Association of Polytechnic Engineering Students (NAPES) inaugural intra-faculty debating contest was held in the early hours of Wednesday, April 21, 2021 at the South Assembly Hall. This colourful event organised by Comrade Ajadi Sodiq led Administration started with the arrival of dignitaries from all across the campus; the chairman of the occasion, The Dean of the Faculty, Dr. (Engr.) I. O. Oladejo who admonished the organizers of the contest. Also on the high table were the Faculty Officer, Mr. Adewoyin; assistant faculty officer; the head of departments and staff advisers.

This was quickly followed by the arrival of the Rector, Prof. (Engr.) Kazeem Adebiyi, along with the Dean of the Faculty of Science, Dr. Ayokunnu. The rector appreciated the invention of such event to promote academic excellence and left with the deans shortly after.
Not long after, the judges were invited to panel; Ms. Oyeniyi Temilolu, a professional journalist and Alumnus of The Polytechnic, Ibadan served as the chief judge. Joining her was, Mr. Oyelere Akinyemi Jelili, an author and renowned poet across the state. Also on the panel was Ogundare Dorcas, a playwright and campus journalist.

Soon the participants of the debate were invited to their seats. Hence, being prepared, equipped to debate on the topic ‘IS EXAMINATION A TEST OF KNOWLEDGE OR FAILURE/SUCCESS?.’ prior the debate started, the chief judge gave a short speech on the modalities of the contest. And in less than one hour, all department spoke on the topic, with them all impressively eloquent.

After a tough deliberation amongst the judges, the results were announced by the Faculty Officer, Mr. Adewoyin. The Department of Computer Engineering came fifth with an aggregate of 310 points from a total of 400, followed closely by the Mechatronics Engineering who garnered 313 points at fourth. The top three was a bit dynamic, Mechanical Engineering emerged the second runner-up with a whopping 333 points. And Civil Engineering edged Electrical Engineering Department 363 to 361 to win the first intra-faculty debating competition.

IBADAN POLY AUTHORITIY SUSPENDS ALL PUBLIC ACTIVITIES IN THE INSTITUTION

A Black Sunday for Poly Ibadan