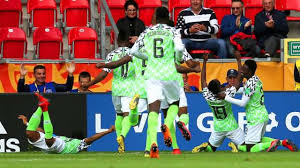 “It was a good match. Both teams played quality football. We dominated the first half, but Ukraine played at home, so the result is natural,” Rohr said, per FFU

The Super Eagles were unfortunately stuck to a 2-2 draw by Ukraine in an international friendly on Tuesday. The first half saw

But the hosts pulled level in the second half within two minutes.

First, Oleksandr Zinchenko dribbled his way through to pull one back, before Roman Yaremchuk bundled in the equalizer.

There is virtually no adventure one embarks on without a thing or two to learn at the end. Super eagles tussle with the Ukrainian team has a lot to be discussed. So, what are the things we learnt?

For all Gernot Rohr’s good intentions, making Daniel Akpeyi his number one goalkeeper at the 2019 AFCON, was a big blunder. Against Ukraine, Uzoho showed why he should never have been demoted. The 20-year-old was assured and assertive, pulling off a number of fine saves, and his confidence was never in doubt throughout the duration of the match, hence, the general claim to hold the number one jersey was well cemented.

Secondly, after being entertained to the sudden retirements of two Super Eagles stalwarts, John Mikel Obi and Odion Ighalo, many Nigerians wondered who their replacements would be. Well, this game gave Rohr and fans a chance to see Aribo and Osimhen in action. And practically they gave a good account of themselves, with both players getting on the score sheet for good measure. Aribo, especially, was a star above the pack, and his inclusion was outrightly justified.

Thirdly, for some reasons, Iwobi is not exactly improving as a footballer, not at all. He seems to have stalled a bit. The former Arsenal man can start a game on fire like he did on Tuesday and then fizzle out like a burning wood being quenched by water. Iwobi was a passenger in the second half, playing some loose balls and should have scored when teed up by Osimhen, but lost his footings – unfortunately.

Also, Rohr’s tactical skill has a lot to be questioned during matches. He took a really long time to make substitutions, despite the fact it was a friendly and he could have changed the entire team if he pleased. Most of the players were not only tired in their legs, but in their minds. Which probably led to the late collapse, and inevitably led to gifting two goals to the opponent. Someone should be please inform him that friendlies are not to be won at all cost. Friendlies are meant to evaluate what you have in your arsenals. No one would crucify him if he changed the whole team at half time and bring in new set of players to play the second half. Talents can’t be just wasting on the bench.

In addition, Samuel Kalu and Samuel Chukwueze were a constant thorn in the flesh of the Ukrainians all day, springing up with some fine combinations. They ran at the defence with delight, drawing fouls and a penalty. Though, they are doing it too much by being selfish. They are trying to show off, so to say. On the flip side, Moses Simon came on and was hugely disappointing down the left flank.

The duo of Kalu and Chukwueze need to be talked sense into, what is the essence of showboating while you are not 5-0 up?

Lastly, the second goal by the Ukrainians team was a very clear error that was supposed not to have stood. The referee saw that the goal was ushered in with hand and even the player that scored it had lost hope of it being counted as a goal and was walking away until the referee went to consult the Asst. Ref., who was not even closer to the post as much as the referee was, to seek his opinion before he later declared the goal. Initially, the referee had made a gesture that the goal was scored with hand, but yet went ahead to consult someone who was far away to the scene to make the utmost decision.

In conclusion, the players played admittedly well, and were well above average for rating, but Gernot Rohr’s tactical nous left a lot to be probed.

THE NEGLIGENCE OF ASO GUARDS AT 1000 CAPACITY